1st event of 2012. And probably, for the 1st time, 3rd generation of volunteers would have got the feel of what AF is and what BMKS (Bacche Mann ke Sache) means to AF and parents. Aha!

Though i could not specifically understand much what parents talked, but i can tell you that it was a very emotional moment for me. I have not given myself the power to grasp new languages (read: Telugu) but God has given me the capability to communicate though. All these years, having seen BMKS and having questioned by many on the impact AF and BMKS creates in the society  through its projects, it was The moment to know all this on 6th May 2012. Few of the parents were filled with gratitude and were very thankful to AF. BMKS project enables education sponsorship to poor and underprivileged and to those who cannot afford it. It was also meant to encourage bright students. One of the ladies was so emotional that her eyes and heart were brimming with rain. Another guardian showered all appreciation on AF because his daughter stood 1st rank in her class and aspires to become a scientist. For him, support that he and his daughter get from AF through BMKS has been able to make some difference in their lives. BMKS project aspires to realize these cute dreams of such students.

Till that moment, no parent was invited to come onto the dais and speak ‘few’ words. But to our amazement, they proactively came forward and shared their experiences with BMKS project and how their children are performing. They spoke of their children’s aspirations. To me, this phase of the event was the best part. Amidst all these shutter-bug moments, I would regret that when parents shared their experiences, we did not have capture those moments in videos.

Along with children, parents participated and shook their legs at small DJ moment. Even they got into the groove and had their dancing shoes on. They spoke from their heart. I can assure you that these 40-odd children’s parents who came to the meeting are genuinely serious about education. There were some parents and children, almost 5-6 in number, who came to any AF event for the first time, with the hope that AF will sponsor their kids also under BMKS. We have taken their details and will decide over those soon.

Event started around 1:00 when we projected AF video. Mr. Jawahar, who is a psychologist, advocate and counselor, had a session with the parents for 40 min. Parents were very enthused and inspired by his words and few videos that he showed. He spoke in Telugu and as usual, I could not understand the language. But to understand certain things, you just need to look into the eyes, hear the reverberations of words, feel the passion emanating out from those words and savor the melody of those moments. With these cues, I was able to sense that parents got the message about their children’s education. And I too got the message, interestingly. He made an offer to us that whenever AF conducts such events, he will be more than willing to come and take a session for parents, volunteers, teachers and children. Head of NGO, Seva, also motivated the audience with his words. These are the kind of experienced people and subject matter experts who are bound to play a crucial role in AF 2.0.

Everyone had lunch. Old-city biryani was the flavor for food-for-thought. I had sufficiently too much and Sadiq was the culprit to make that happen. After lunch, children performed a skit and two dances. BMKS students came forward and displayed their prowess. They sang, recited poetry, shared what their dreams consist of. Parents too pitched in. They spoke of what dreams they have for their children and with what ‘Aashayein’ they had come for the event.

Akshara and Parameshwari had arranged for a small DJ and all the beautiful girls – kids and volunteers, aka ‘Chikni Chamelis’ – shook their legs. Throughout the event, Swati, Pooja, Spandana, Harleen, Srinath, Sadiq, Priyanka, Priya, RaviKanth, Srinivas, Hanumanth and Yogita made sure that they collected all the personal, family and academic data of students and parents, clicked the individual photographs and family photograph of students. Santhosh and Jagadish were very helpful throughout, they got the report cards and attendance sheets of students Xeroxed. We had intimated in prior advance to the parents to bring those documents. So, after this event, we have collated most of the students’ data, their latest photographs and their updated personal details including contact numbers. Anji, like on every occasion, was involved in each and every activity of the day and made his presence felt. At the end of the event, I could see that his AF t-shirt was completely stained as if like ‘icing’ on the cake, literally. Moment Akshara came to Hyderabad on her summer vacation, she desired to be part of AF and event. And lo! On d-day, she was the official MC (Miss of Ceremony) for the event. On Sunday morning, I received a  message from Sudha. Completely caught unaware who she was, I replied to her that she is most welcome to be part of the event. During the event, I discussed with her and found that she works for Wipro and participated in AF event for the 1st time during WalkON 2009. And immediately after the event in Jan 2010, she was deputed to onsite location. Then I realized it was Sudha J. who also is a sponsor for BMKS students. She captured the moments of the event in her SLR. Now, this is called loyalty and the desire to be associated with a cause. I feel very inspired when I hear such stories filled with commitment and loyalty. These small stories, anecdotes and experiences are all that has made AF going strength to strength all these years. Everyone who came yesterday left his / her own stamp on the event. I would like to thank every volunteer who contributed physically during the event and pre-event through their mails, ideas, FBs shares and posts. Volunteers without whom this event could not have happened are Subhasini madam (full-timer in AF now), and Swati and Pooja (MBA interns from IBS), who visited the homes of BMKS children, informed them and parents about the event and solicit their presence for the day. 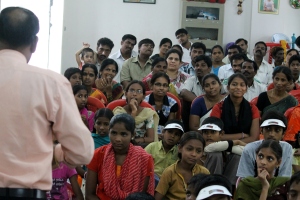 I made an important announcement during the event that in another few months, AF will start a free-of-cost computer centre for all the BMKS students who want to learn computers. This proposal needs to be planned, designed and implemented and funding aspects need to be chalked out. Mostly, in the month of July-August, we will organize sports day for BMKS and SA children. And december 2012 will see the biggest event of Aashayein so far, The Return of WalkON.

Watching almost 40 children and their parents on same platform for 1st time in AF was a very heart-rending moment for me. It was a visual treat, marathon of colors and emotions. I am very glad that this is the new beginning for AF, Hyderabad. This initiative was a very different one. Rather than creating a push strategy, focus is now more on pull strategy and results were on display during the event. Lot of thought and planning goes into each and every activity of AF. It goes a long way to prove that you do not have to do different things every time but it is also about doing same things differently. Now, it is getting clearer as to how AF has to strive and thrive.

Those who missed this event missed a beautiful day in their lives. 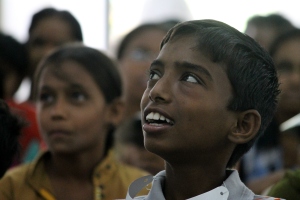