It’s cloudy? sun playing hide and seek behind the clouds? Worried that you have to return back without a signature photo of New York skyline? Happens when it is New York city. 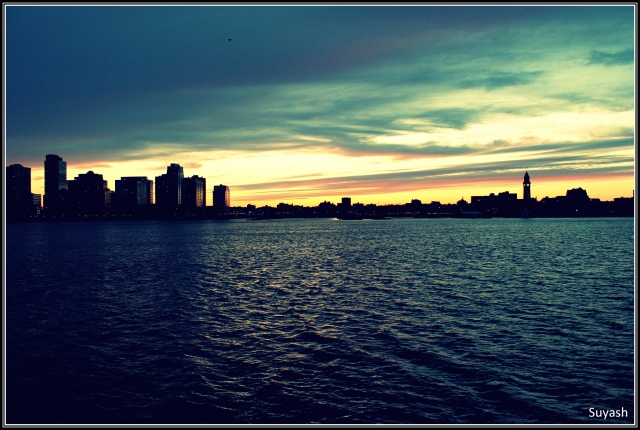 I too was in a similar dilemma few days back. Evening was fast approaching and I was still not satisfied with my captures of the skyline. I had read that there are a few points from where you can get majestic view of New York skyline. Across the Brooklyn Bridge, Statue of Liberty, observatory decks at Empire State Building and Rockefeller Building are few of those. But I was still looking for the best one. Whole day, the city had been cloudy and windy.

Fortunately, I got my best shot only towards the end of the day. And I tried my luck with the twilight tour of New York Island in a cruise boat. The cruise started at pier 78 Hudson River and was of 90 minutes duration. On my way to the skyline of financial district closer to the Battery Park and then to Brooklyn bridge, I could get very good view of the skyline. Then we proceeded towards the United Nations building. By then, the western sky was already with all hues and colors of red and orange and more. The Brooklyn Bridge, with its bulbs, was setup against the yellow of the nature. As we proceeded towards the Statue of Liberty, I noticed that the skyline of New York was now in ‘flames’ and the glasses reflected the orange color falling on it. River water had a beautiful color, which made the setting very mesmerizing. One World Center building, Empire State Building, Chrysler building looked grand and magnanimous. Our cruise was now close to Statue of Liberty. Sunset color in the background of the Statue gave a very opulent and amazing view of the Statue.

The skyline with its tall concrete beauty was enticing at twilight. By the time, our cruise was over, the skyline with its shady blue and millions of lights of the city gave an artist’s imagination of this city. This was what I had always wanted to see in New York. One of the most sought after photo moment of New York skyline, i must cherish.