My Wanderlust for America’s Famed Southwest on a Roadtrip

Few years back, when i started reading and watching about the national parks of USA, i was awestruck by the beauty of the arid, hot and desolate landscape of Southwest region of USA. Despite being a desert where vegetation is so limited and population sparse, America’s Southwest is one of the geographically most diverse and dramatic places in USA, and probably on earth. Miles of nothingness except the red rocks or canyons or elevation (mesas and buttes, too) make this region very beautiful for travelers and photographers alike. Not to forget conditions can get hostile within hours here, if proper care is not taken.

In April of this year, we went on a over week-long road-trip to America’s Southwest covering national parks in the states of Nevada & California, Arizona and Utah. Our itinerary included Death Valley National Park, Grand Canyon National Park – South Rim, Antelope Canyon, Monument Valley, Arches National Park, Mesa Arch in Canyonlands National Park, Bryce Canyon National Park, and Zion National Park. If you see our trip map below, you will find that these places can be explored as part of a complete loop with around 2000 miles of driving and with Las Vegas as the airport for flying in and out. Though we spent some quality time in these parks, i have a wanderlust to come to these parks again next year or later this year, because these parks are so inspiring, adventurous and lot fun to photograph. In my future posts, i will share details of how i planned for this trip (with our 20-months old daughter), about our experiences and more photographs from our road-trip and parks. 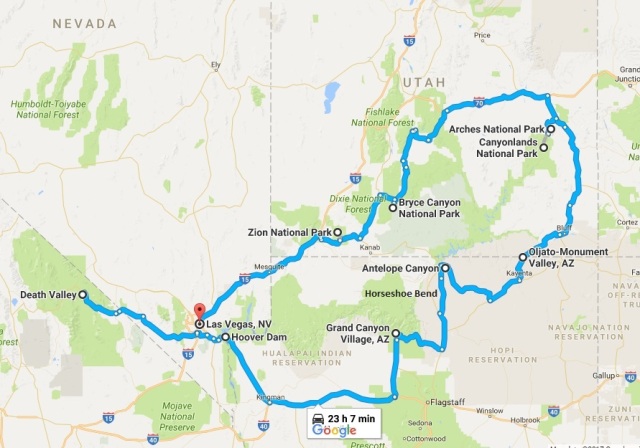 Shot at the top of this post is of Wilson Arch located 25 miles south of Moab in Utah. We were travelling on highway US 191 North from Monument Valley in Arizona to Arches National Park in Utah. Before entering Moab, which is like the base for visiting Arches and Canyonlands National Parks, you will find this arch on your right hand side. We made a brief stopover at this huge formation, formed by the erosive forces of nature, before visiting the famed arches of Arches National Park. It is worth mentioning here that around 2000 known arches, both small and large, exist in the park.