In the previous blog, you read about my top ten activities in Guanajuato, Mexico. Now I am listing my top five not-to-be-missed attractions of Guanajuato city.

1. Teatro Juarez – Located at the centre of Guanajuato city in Jardin Union (Read the activities at Jardin Union), this is a 20th century theatre with magnificent architecture. It is one of the most important cultural landmarks of the city. Building resembles Roman and Greek style and in parts Moorish architecture as well. A number of wrought-iron lampposts, bronze lions, huge Roman pillars and six huge bronze statues at the roof greet every visitor to this opulent theatre. Statues at the roof represent the various Greek goddesses (muses): of poetry (Caliope), history or music (Clio), music & dance (Erato), music song and dance (Euterpe), comedy and idyllic poetry (Thalia), tragedy plays (Melpomeni), choir and ballet (Terpsichore), sacred religious poetry and hymn (Polymnia) and astronomy and astrological writings (Urania). Several steps leading up to the theatre are a favorite spot for visitors to relax at Jardin Union. Currently, this theatre hosts so many musical events and plays. It is one of the main venues of Cervantino Festival. 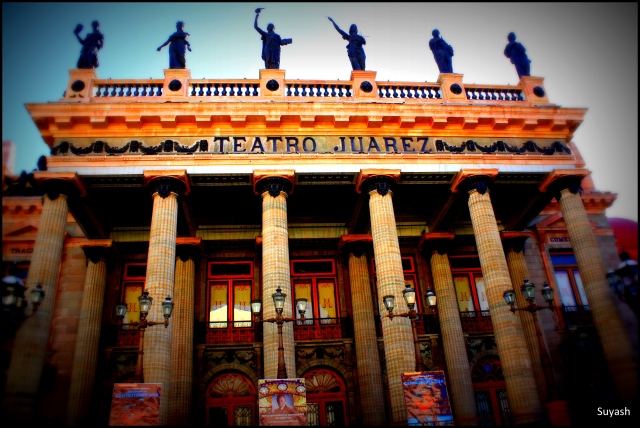 2. University of Guanajuato Main Building – Do not assume it to be just an architectural building of bygone era. Established in 1732 and one of the oldest universities of Latin America, it is a working university with more than 30,000 students. It is a huge, green cantera stone picturesque building with impressive Moorish architecture. The world-famous Cervantino Festival of Guanajuato, one of the finest festivals of performing arts, was started by this university. Students of this university – artists and actors – perform in the city at various plazas on a regular basis. Various musical performances and cultural events happen here in the auditoriums inside the University building and also on the famous staircase (113 stone steps in total) at the entrance of building.

Entrance to the main building closes at 4pm for the visitors.

3. Cristo Rey Monument (Christ the King) – This 65 ft statue of Christ, very similar to the Christ the Redeemer of Rio de Janeiro, atop 3000m Cubilete Hill, is one of the must-visit attractions in Guanajuato. You can have a majestic panoramic view from the top of the mountain. This statue is visible from Guanajuato airport as well. Cubilete Hill, on which the statue is located, is considered to be the geographic center of Mexico. This bronze statue of Christ is one of the sacred sites in Mexico. Monument is approx 16 km from the city of Guanajuato, en route to the city of Leon, famous for its shoes. Site is accessible by public buses from the downtown, or you may drive up the hill as well or take a tourist bus, though road leading up to the monument is bumpy and not in great condition.

4. Mummies Museum (Museo de las Momias de Guanajuato) – This is one of its kind museums in the world which has a collection of over 100 mummies of the people of Guanajuato. Unlike the mummies of Egypt which were embalmed, these mummies are formed due to natural dehydration process and are real. Few of the mummies may scare you and have an expression of horror on their faces, possibly referring to the circumstances of their death. This museum is my personal recommendation, which, I am sure, is bound to evoke the thoughts of life and death in you. (Read more about the museum in my blog)

5. Monument of El Pipila – This 28-meter tall monument of a Mexican freedom struggle hero, El Pipila, stands very tall today on San Miguel hill. It is situated very close to Jardin Union and can be reached by a funicular (cable car), located behind Teatro Juarez. Or simply, the enthusiasts can simply climb the small hillock using staircase as well. El Pipila, a miner, was a local hero of Mexican war of independence against the Spaniards. In his act of bravery for which he is known, he tied a big stone to his back to ward off the shots from Spanish troops and entered the old granary. Spaniards had stored lot of silver and other precious materials, looted from the mines of Guanajuato and Mexico, in this

granary. He stormed inside the granary and killed all the soldiers inside. For his heroism, he earned a special name in Mexican history of freedom struggle. City of Guanajuato paid its respect to its legendary war hero by installing this huge statue in the city. Once you are up there, you get a stunning view of Guanajuato city, which you cannot miss.

Cost of funicular is 18 pesos one side and 36 pesos round trip. Try going to the monument in the evening as well to view the city lit up.

Basilica of Our Lady of Guanajuato 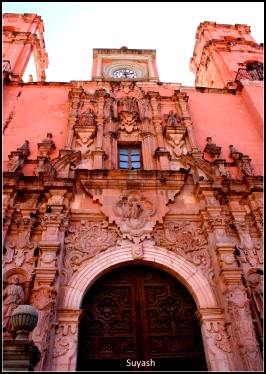