Unwind on the Winding Streets of charming Toledo

Do you know which city was the capital of Spain, before Madrid? Is your answer among these famous cities of Spain – Barcelona, Seville or Valencia? Disappointment. 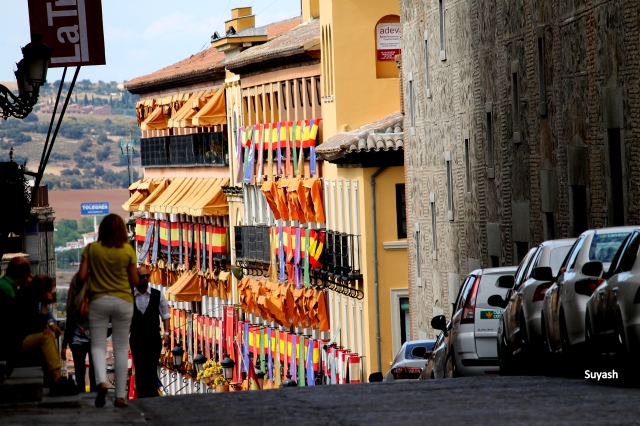 It is Toledo. Have you visited the place? Toledo served as the capital of Spain, before Madrid became the capital of Spain in 1563. A medieval walled city where three cultures flourished – Christians, Jews and Arabs – is the beautiful, charming town of Toledo, 74 km south of Madrid. Historic city is declared as the world heritage site by UNESCO. Once you start walking on the cobbled-stoned, winding, labyrinthine streets of Toledo, you will realize why this is such an important cultural landmark on the map of Spain.

Toledo sits majestically like a pearl on a hill overlooking the Tajo River. River kisses the old city on its three sides, and the fourth side is embraced by the medieval walls.

Best way to experience Toledo is by walking. It is not a big place and hence, you can walk the entire old city. There is a high probability to get lost (literally lost) in the maze of streets, sometimes climbing up the streets and at times, descending down with the splendid view of the town. I would strongly recommend you not to locate yourself by looking constantly at the map or your GPS because it is pleasure and an experience to be lost, sometimes. (Read about another postcard city – Guanajuato (Mexico) where you MUST get lost!) Let me give you an important traveling tip here. A descending street generally takes you away from the city center – Plaza de Zocodover – either towards the River Tajo or the walled side of the old city. And when you are catching up on your breath, trying to climb up the streets, there is a high likelihood of ending up at city center Plaza de Zocodover, the highest point of the old city.

Famous Alcazar is close by. In its earlier avatar, it was a fortress but now has been renovated to Spain’s official military museum, Museo del Ejercito.

When you are lost, just immerse yourself and soak up in the beauty of this archetypal and gorgeous town. Then talk to the locals (knowing Spanish is an advantage) and ask the path to Santo Tomé – Obrador de Confiteria – one of the most famous bakeries in Spain, where you can relish the mouth-watering, almond based sweet Mazapán. This 1856-established bakery is located in the historic city center, Plaza de Zocodover. When you savor the sweet, remember that you are tasting an ancient tradition of Spain. (Read about a Spanish tradition, which must end SOON now)

The above photograph was shot in the Plaza de Zocodover, with streets descending down, embracing the colorful Toledo. More photos of descent here.

I will cover more details and photos of this experience, called Toledo, in further posts. So, keep reading 🙂 Read about Alcazar and the famous Cathedral of Toledo here.

How to Reach Toledo: Once in Madrid, catch a bus at Plaza Elíptica bus station which takes you to Toledo in around 1 hour 30 minutes. However, the faster way (though not the cheapest one) to reach Toledo in 33 minutes is by high speed AVE trains from Puerta de Atocha station. You can book your tickets online in advance which cost within 22 Euros. There are number of trains traveling in both directions and hence, Toledo is considered to be on a day-trip itinerary. However, i would recommend you to stay in Toledo and enjoy the smallness of a city and the magnanimity of cultures. After reaching Toledo train station, hop on to the city bus number 5 or 6, which takes you to the city center, Plaza de Zocodover, in less than a Euro.

Have you visited Toledo? Do tell us about your experiences in Toledo. Would you be interested to know more about this enchanting historic city?

My spain trip was not a tourist trip but a business trip to attend SEPG conference. Read about my experience of the conference here.

16 Responses to Unwind on the Winding Streets of charming Toledo